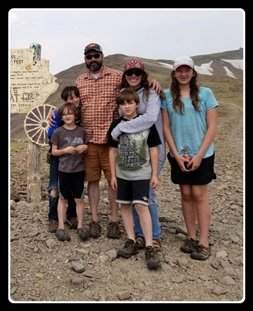 Brian was born in Memphis, Tennessee to Rod and Terry Robison. Growing up, he attended Riveroaks Reformed Presbyterian Church and Evangelical Christian School. After graduating high school in 1997, he went to the University of Memphis. Shortly after, he began his career in Information Technology.

In 2001, he married his wife, Cammie Allmon. Brian and Cammie have four children: Brinsley, Jacob, Samuel, and Benjamin. They have been living in Colorado since 2011 where Brian enjoyed hiking, backpacking, Jeeping, camping, and fishing with his family. He was the Director of IT and DevOps at Boostlingo.

Brian was a loyal and generous man who always said yes when someone asked for his help. He

loved his family and friends deeply and was ready for an adventure at a moment's notice. Brian was a servant to God and a disciple of Jesus. He was a devoted husband and father, as well as a loving son to his parents, a faithful brother to his siblings, and a fun-loving uncle to his nieces and nephews. Brian’s family and friends are shocked and deeply saddened by the loss of such an important and beloved member of their family.

Brian is survived by his wife, Cammie, and their four children ages 8-15; his parents, Rod and Terry Robison; his siblings Timothy (Angie) Robison, and Lacey Robison; and two nephews; as well as his Grandparents, Bill and Carol Woods; and many loving aunts, uncles and cousins. He is also survived by his in-laws, George and Trudy Allmon and his brothers-in-law and sisters-in-law, Tom (Sissy) Allmon, Barry (Michelle) Allmon, John (Susan) McSpadden, and Kelly (Jeff) Trouy; and 15 nieces and nephews. He was preceded in death by his Grandparents, John and Martha Robison.

A service celebrating Brian’s life will be held for family and friends on February 15 in Evergreen, CO., at 1 p.m. at Bergen Park Church, 31919 Rocky Village Drive, Evergreen, CO.

In lieu of flowers, please visit their GoFundMe page: https://gofund.me/27495842

Romans 5:1-11
Therefore, since we have been justified by faith, we have peace with God through our Lord Jesus Christ. Through him we have also obtained access by faith into this grace in which we stand, and we rejoice in hope of the glory of God. Not only that, but we rejoice in our sufferings, knowing that suffering produces endurance, and endurance produces character, and character produces hope, and hope does not put us to shame, because God's love has been poured into our hearts through the Holy Spirit who has been given to us. For while we were still weak, at the right time Christ died for the ungodly. For one will scarcely die for a righteous person—though perhaps for a good person one would dare even to die— but God shows his love for us in that while we were still sinners, Christ died for us. Since, therefore, we have now been justified by his blood, much more shall we be saved by him from the wrath of God. For if while we were enemies we were reconciled to God by the death of his Son, much more, now that we are reconciled, shall we be saved by his life. More than that, we also rejoice in God through our Lord Jesus Christ, through whom we have now received reconciliation.

To order memorial trees or send flowers to the family in memory of Brian Robison, please visit our flower store.