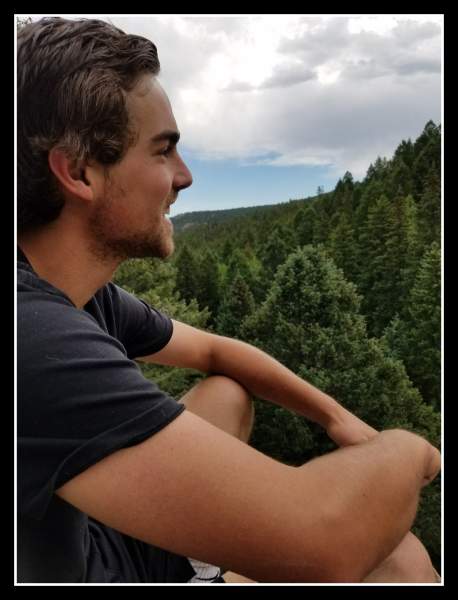 Harrison James Grant, 26, passed away on April 5, 2022 from hypothermia while hiking in the mountains. He was born to James and Annette (Huppert) Grant on March 19, 1996 in Edina, MN. He grew up in Savage, MN and graduated from Prior Lake High School in 2014.

Harrison moved with his family to Evergreen, CO in 2016, his perfect home where he could fully indulge his love for nature, wildlife, and the outdoors in general. He was an avid hiker who could go, go, go for as many as 15 miles in a day, reveling in nature’s beauty. Harrison loved to camp and ride his ATV, and was an expert hunter and outdoorsman who was really good at bird and animal calls.

Harrison was a man of many talents. He had a natural ability to embrace any challenge…new people, new activities, and new things to learn. Harrison had a thirst for knowledge that led him to learn everything he could on any topic that caught his attention. He had outstanding knowledge retention skills and could talk endlessly on those topics. He loved the weird stuff! Harrison also was an excellent cook who used only the very best ingredients. He was proud of his cooking and got a lot of joy from it.

Harrison and his brother Joe worked together in their Grant Property Medics business. The idea for the business was sparked while they raked pine needles on their family’s property. They did everything, such as tree removal, landscaping, bathroom and kitchen remodels, and finishing work. Harrison was a talented craftsman who could take something old and make it beautifully new.

We are grateful to the Alpine Rescue Team and to friends for their efforts to find Harrison while he was missing. He finally was found when a bird chirped and screamed relentlessly at Terry, who works on the ranch that was searched. Terry approached the bird to ask what was going on. He looked past the bird and saw Harrison in a ravine filled with 30” of snow. We believe that Harrison was speaking through the bird to tell us, “I’m over here!”

Jesus spoke to Harrison and said, “Come along with me, my son” when he left this earth and as the angels ushered him into the hands of the One who perfectly timed this moment to receive our son: Not one moment too soon or too late. The God who breathed life into him when he was born also breathed his last breath with him in the end.

Harrison is survived by his parents, sister Julianne, and brother Joseph of Evergreen, CO; his grandmothers Darlyne Huppert of Ellsworth, WI and Patsy Grant of Grand Junction, CO; and many aunts, uncles, and cousins. He was preceded in death by both grandfathers, Joseph Grant and Raymond Huppert, in November 2021.

Memorials may be made to the family.  For those who cannot attend the Celebration of Life, cards and/or memorials can be sent to 6712 S. Columbine Road, Evergreen, CO 80439

To order memorial trees or send flowers to the family in memory of Harrison James Grant, please visit our flower store.