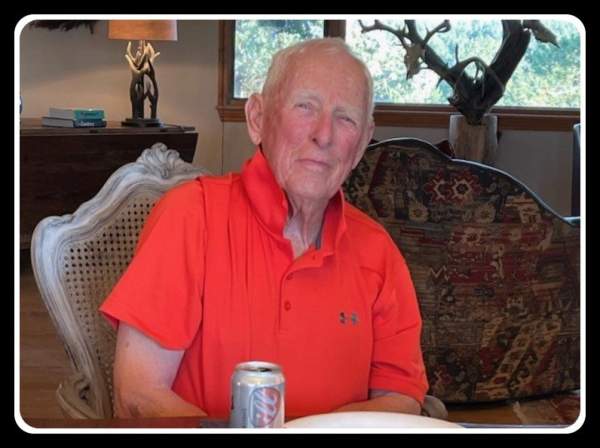 Harry Edward Murray, Jr., “Tim” to his sports friends, passed into new life with Jesus Christ on Sunday, February 6, 2022 after a brief illness.

In his 94+ years it is hard to imagine anyone who lived life more fully. Harry loved life, he loved people, and people loved him. A natural extrovert/salesmen, his easygoing nature was admired by many. Harry loved sports and often said “sports kept him out of trouble.” He loved golf and football (Go Bucks!) most of all, however you could also frequently find him tuning into baseball, basketball, and hockey. Harry officiated all three of those sports and mastered the game of golf. The week he turned 93 in 2020, he celebrated by playing four 18-hole rounds with close friends and shot a 94 on his birthday. He loved taking in a Colorado Rockies or Avalanche game whenever he could. After moving to Colorado in 2016, he was equally enthusiastic about catching a football game at the Colorado School of Mines, the University of Denver, the Air Force Academy, and the University of Colorado. Harry embraced physical fitness and was healthy and active throughout life. If it involved people, a score, some strategy and fun, Harry could be found in the mix.

Harry was born in Akron, Ohio and graduated from Garfield High School. He took a break from his senior year in 1944 to join the Merchant Marines and contribute to the World War II effort because other branches of the service would not enlist a 17-year-old. He sailed through the Panama Canal and went to the Asian Pacific. At the end of the war, he returned to finish high school, where he was asked to make scrapbooks about his experience.

Later, in the 1950s he joined the Army and was stationed in Massachusetts where he met his wife of 58+ years, Elinor May Benson. Harry and Elinor had a daughter, Ellen and made their home in Lebanon, Ohio for 43 years. There they were active in their Episcopal church – first St Patrick’s and later St. George’s, at Wildwood Country Club and with many friends from football and golf circles.

Professionally, Harry worked for nearly 40 years as a salesman with Century Toro of Cincinnati, Ohio. He called on golf courses and Wright Patterson Air Force Base. He received recognition as a top salesman for Toro nationally. In 1963, Harry helped to start the Ohio Turf Grass Foundation, in which he remained active. He was a member of the Ohio Football Officials Association, refereeing both high school, and college Division 3 games. Many of those he mentored went on to officiating careers in the NFL. Among his awards and recognitions, he was honored by the Ohio High School Athletic Association for his service to high school sports. Harry also rated golf courses on behalf of the US Golf Association.

In his final years he lived with his daughter Ellen in Conifer and Buffalo Creek, Colorado. He spent his days at Bear Creek Golf Club, and on Mondays, he played public courses with his buddy & minister, Father Mike. He regularly went to the gym to walk on the treadmill and lift weights and he frequently used a personal trainer to keep his golf swing in shape. He also liked to have massage and chiropractic (also to optimize his golf game). He attended the Episcopal Church of the Transfiguration in Evergreen, Colorado. He played an active role in the lives of his grandchildren. He stayed in touch by phone with many old friends, easily made new friends and constantly continued to learn new things. Even in his final week on earth he was questioning a call in the Rams/49ers game, and he was happy to know the Bengals were finally returning to the Superbowl.

In heaven he will be reunited with his wife Elinor who passed in 2017, his parents Harry and Thelma Murray and his beloved Uncle, Everett Lemaster. Deeply faithful, Harry lived fearlessly. Weeks before his passing he was watching playoff games, challenging the ref’s calls or lack thereof, and joked that he knew “God is going to blow the whistle on me soon!”

A celebration of life will be held at the Little Chapel in Buffalo Creek, Colorado at noon on Saturday, March 19, 2022. An additional gathering will be planned for later in the spring at Yankee Trace near Lebanon, Ohio.

To order memorial trees or send flowers to the family in memory of Harry Edward Murray, Jr., “Tim”, please visit our flower store.