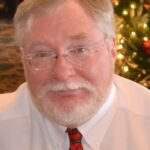 (Wallace) Jack Harper, Jr., died Friday, March 12, 2021 after a year-long battle with cancer. Jack died at home in Evergreen with his wife and beloved son holding his hands. Jack was born on May 30, 1952 in Paducah, Texas, to Wallace Jack Harper, Sr., and Hattie B. Lloyd Harper. A curious scientist from the start, Jack burned down the family home at the age of three while experimenting with matches. He went on to graduate from the University of Houston with a B.S. in Electrical Engineer, a B.A. in Mathematics, and a four-year minor in Russian Studies. The EE program was an entrée to the world of computers and to Jack, computer programming was an art as much as a science:

Early in his career, Jack programmed on mainframe computers, working for the likes of NASA and EDS, and programming war game simulations for the U.S. Army 5th Corps in Frankfurt, Germany. Jack moved to Denver in 1980 and settled in Evergreen with his trusty cat, Spot.

Jack nurtured an entrepreneurial streak on the side, first in the form of “Rent-a-Casket” in Galveston, TX, and then a business flying shrimp from the Gulf of Mexico to restaurants in northern Texas. Once in Denver, Jack’s entrepreneurial spirit was stoked by the high-tech market. Over the years, he founded or promoted start-up companies and products in the fields of real-time embedded hardware-software crypto systems; advanced digital livescan fingerprinting and biometrics systems; variable-topology supercomputer systems for artificial intelligence; vaguely autonomous laser-imaging guided mobile security robots; and instrumentation (kidney dialysis and laparoscopic ultrasound gear). Jack worked, consulted, and sold systems with feet on the ground in 23 countries. He held eight issued patents and had new ideas in the works at the time of his death.

Jack was a talker and a storyteller; he could sell anything to anyone. He studied mathematics, physics, WWII history, and astronomy throughout his life. He earned an MBA through the University of Denver and his lifelong, unmet goal was to study at the London School of Economics. Jack left behind a bunker full of ham radios, a museum-sized collection of vintage Lisp computers, and an observatory on his back deck,

Jack met his wife, Kathleen Kulasza, through their shared love of cats. He had two and she had two at the time they married in 1989. Throughout their marriage, they never had fewer than three cats and, at times, as many as eight. Jack loved being married and was the most romantic of husbands, but he did think eight cats was too many.

Jack was dad, best friend, boss, and mentor, to his son, Nick Harper. Jack tried hard to instill the values of hard work, perseverance, loyalty, and optimism in his son. We think he succeeded and he was so proud of his son. Nick will miss him dearly.

Jack is survived by Kathleen, Nick, and Nick’s wife, Erin Wilson. Nick and Erin moved from Dallas to Denver in July 2020, to help care for Jack; they live in Lakewood. Jack is also survived by his sister and her husband, Sue and Paul Murphy of Spokane, Washington, and their sons, Kevin and Colin. Felines Fluffy, Ziggy, Moose, and Rooster comprise the rest of the Harper household. Barbara and David Vaughan, Kathleen’s sister and brother-in-law, have provided constant care and support throughout this ordeal and deserve an eternal “thank you.”

Funeral services will be private. Donations may be made in memory of Jack Harper to: University of Houston Cullen College of Engineering, https://giving.uh.edu/eng/ .

To order memorial trees or send flowers to the family in memory of Jack Harper Jr., please visit our flower store.