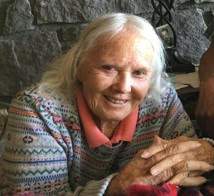 Nadine Simonds passed away on October 1 st  in her home on Lookout Mountain at the age of 92. She was surrounded by her loving husband, Richard Simonds, and children, Corinne Wiles, Scott Simonds, Diane Carter, and Bill Simonds (in spirit).

Nadine was born in Shelton and lived a houseboat in the Puget Sound of Washington State for a short while with her twin sister, Corinne. At a young age, the identical twins moved and grew up in Grand Coulee while the dam was being built on the Columbia River. They learned to swim like a fish and excelled in tennis. Nadine and her sister became independent and self-reliant while living with their mother and engineer father. Life was not easy then. A divorce and financial hardship meant the sisters had to work hard, be strong, persistent, and stubborn. That did not stop Nadine! She earned a scholarship to the University of Minnesota where she graduated with a degree in Physical Therapy. She eventually took a job at Children’s Hospital in Denver, Colorado in 1956 where she reunited with and married her husband Richard in March 1957. She loved working with children and was considered an expert with innovative treatments for kids with cerebral palsy. Nadine also enjoyed working with geriatric patients toward the end of her career.

Nadine’s determined approach to life was uniquely suited to the Colorado mountains where she and her husband worked hard to build a home, raise 4 children, and pursue an adventurous life. She taught her children her love of the outdoors by skiing in the winter; river rafting, kayaking and mountain climbing in the summer. Together, the Simonds family shared many unforgettable experiences. Nadine’s passion for mountain climbing started in the Cascade Mountains at a young age and culminated in summiting all 54 of Colorado’s 14,000-foot peaks and many 13er’s too! Nadine loved sharing these adventures with her family and many friends. She will be missed but Nadine’s adventurous spirit will forever grace the mountain peaks and river canyons and all places wild, and certainly in our hearts and lives.

Nadine is at peace now sitting on a mountain top with her beautiful granddaughter, Laci Simonds, who passed away suddenly in September 2015. Her laughter and wisdom will be remembered and cherished by her immediate family and awesome grandchildren: Dakota Wiles, Cori Carter, James Wiles, Nikai Carter, Wesley Simonds, and Ria Simonds.

To order memorial trees or send flowers to the family in memory of Nadine Simonds, please visit our flower store.