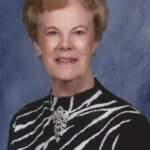 Valerie Elvidge Loucks was born March 15, 1932 to Myrne and Raymond Elvidge in Montreal, Quebec. She passed away peacefully on March 20, 2021.

Valerie earned a degree in Home Ec from McDonald College near Montreal. She met her future husband, Charles S. Loucks at a USO Club in Washington, D.C. They were married June 2, 1962 and lived in Arlington, VA for over 50 years. The Loucks relocated to Gainesville until Charlie’s passing in 2014. Valerie then moved to Harrisonburg to be with her son Glenn and a few years later to Colorado to live closer to her daughter Karen.

Valerie and Charlie enjoyed many exciting world travels together. Their honeymoon trip included a trans-Canada train journey and a visit to San Francisco.

The Loucks were active members of Westminster Presbyterian Church for over 50 years were they participated in leadership and social roles. She loved singing and had a beautiful soprano voice. She was a member of the Aurora Hills Women’s Club and served as a docent in historic Old Town Alexandria.

She enjoyed bowling, swimming and was an avid walker. Valerie created many beautiful needlework pieces and was a member of the prayer shawl knitting group at Pax Cristi Church. She was an active volunteer for Project Linus, adored flowers, furry animals and was a self-professed “chocoholic.”

Most of all, she loved her family, relishing time with them. Valerie was preceded in death by her parents; brother Ross; nephew Mark Elvidge and her husband, Charlie.

Memorial contributions in Valerie’s name may be sent to:

To order memorial trees or send flowers to the family in memory of Valerie Elvidge Loucks, please visit our flower store.